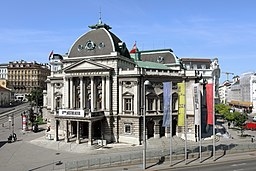 Much Ado About Nothing and the 7AB

On Friday, June 8th, students of the 7AB attended an acting workshop at the Volkstheater as part of their English classes. In recent lessons our English teacher, Ms Wolfram, introduced us to the topic of Shakespeare and his times through books, poems and Playmobil figures. The excursion was about Shakespeare’s comedy “Much Ado About Nothing” / “Viel Lärm um nichts”.

On the top floor of the theatre, the “Black Saloon” turned into Friday’s stage. For a warm-up, we played games like “Samurai” and “HiHaHo”, and Bettina, our tutor, made us try out new things, including screaming as if there was no tomorrow! As part of the drama workshop, we then created improvisations. Finally we split up into small groups and prepared scenes from the play. Thirty minutes later we perfromed dramatic, innovative and hilarious scenes, all for the entertainment of tutor, teacher and students!

Leaving the Volkstheater that day, everyone felt a bit of relief and definitely curiousity for the “real thing”, a performance of “Viel Lärm um nichts” on June 20th.